For their January 27 “Last Monday of the Month” performance at the Deer Head Inn, the Deer Head Jazz Orchestra will perform the music of Wolfgang Knittel’s Jazz Artists Repertory Orchestra (JARO) in memory of Richy Barz, an esteemed colleague, personnel manager, and baritone saxophonist in JARO and a beloved member of the Pocono jazz community, who died on Christmas Day 2013.

After completing his education at the 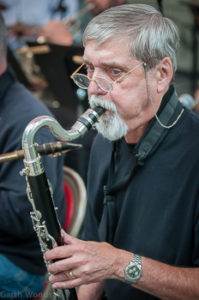 Crane School of Music in Potsdam, NY and playing with the United States Army Field Band, Richy began a five-decades-plus career as a performer, road manager, and booking agent for an impressive “who’s who” of the Big Bands (including six years touring and managing the Glenn Miller Orchestra and years contracting and playing with Les and Larry Elgart). Richy worked as a booking agent in the Willard Alexander Agency, The Jim Halsey Company, and his own Richard Barz and Associates. Richy knew everybody in the business.

In 1986 Richy moved to the Poconos, where he and his wife, Nancy, opened their own company, Big Band Productions, producing, directing and marketing top-name Big Band luncheon shows at various hotels in the area and performing especially at Mount Airy Lodge in the heyday of live entertainment at Pocono resorts.

1990 marked the first of his continuous performances with JARO at the Delaware Water Gap Celebration of the Arts (COTA) Jazz and Arts Festival. JARO was founded over a decade earlier by Wolfgang Knittel and the late Ralph Hughes, a trumpet player with shared responsibility for founding the Al Cohn Memorial Jazz Collection. Richy became the band’s musical contractor and principal booking agent.